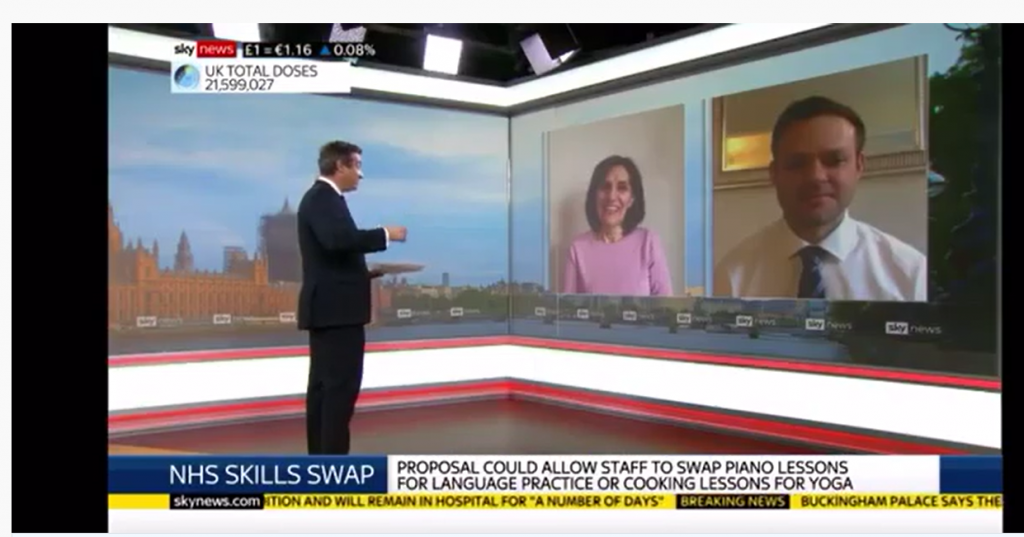 Without sounding like we are accepting an Oscar, we would like to say thank you Aggie Fathieh and Ricci Plastow for sharing your experience meeting through eSwapp as NHS workers and swapping Persian cuisine for meditation/mindfulness technique. And thank you to Niall Paterson, Sky Correspondent, for your great questions to the interviewees, Cleudi Gossage for co-ordinating the show and getting us a primetime slot even during budget time. And a very BIG thanks to Umar Farouq for your introduction. It is very much appreciated.

https://www.eswapp.com/nhs/ We are on the telly! 🙂

Niall Paterson- Sky Correspondent: Now an app has been launched to help NHS staff combat stress during the pandemic. It pairs them together so that they can share their hobbies and skills, such as swapping music lessons for languages. Joining us now on the program two NHS staff who’ve taken advantage of the skill swap, Aggie Fathieh, who is a Diabetes and Wound Care Lead Podiatrist, and the Orthopaedic Surgeon, Ricci Plastow. Guys. Great to have you both on the program this morning, and Aggie, I should probably apologise, given that you were having your own Guy Goma* moment there. And apparently, we were just about to comment on Scottish politics, apologies for putting you live to air there for a second, you held it together well. Let’s just start with you then, Aggie. If you could just explain a little bit about this, this eSwapp app and how it’s worked for you guys.

Aggie Fathieh: Thank you. It was recommended to me by somebody that I knew. And I started talking, I was introduced to Ricci. And as we started talking, quite almost instantly, I felt at ease and I felt that I knew he might have had something in common with me. So it was a very good experience. And I found myself when I actually started talking to Ricci, like about five, ten minutes later, I found myself talking to him about things that I never thought the day before that me sitting in my house here, and this is a guy that I’ve never heard of never talked with. And he was sitting in London talking about his shared experience. And it was very nice, especially at this time, with all the restrictions and the lockdown. It was a good experience.

Niall Paterson- Sky Correspondent: Well, let’s go to the other end of this, this correspondence relationship that is going on at the moment. I mean, Ricci, of course, when we heard about this, everyone was focusing on the skills that people are swapping, and I’m sure you will tell us a little bit about that, but as much as anything else, you know, it’s colleagues in the health service reaching out and you know, supporting each other in some very interesting ways.

Ricci Plastow: Yeah, I completely agree. I think it’s been such a stressful time for NHS workers being put under long hours especially the intensive care staff and redeployment and to have sort of extra connection with other workers that have been in the same situation, it’s so easy to download the app and sign on and basically just give some skills to other people and be able to learn some other skills from colleagues in the NHS, it’s been brilliant, actually, to just connect with people that probably you wouldn’t know without the app.

Niall Paterson- Sky Correspondent: I mean, Aggie, we’re looking at some pictures here. And Ricci is as zen an Orthopedic Durgeon as I’ve ever bumped into. But I wonder, you’ve been teaching him, you know, some skills involving Persian cuisine. How is his food? I suspect you haven’t been able to taste it just yet, but you’ve had a look at the presentation.

Aggie Fathieh: You’re asking me, I don’t know how he cooks, but I’ve given him some very, very simple recipes and some cheats that I use even the easiest way of making cheese on toast nowadays, which is yes, microwave made. And it was just fun. It’s not a very official thing. You know, you can learn a lot, and he taught me some mindfulness strategies, and it was actually good, I used it yesterday. But as he was talking about it, I actually tried to exercise it and it was so easy. And it was comfortable. It was better than what I had done before, because I had training for that before, but this was good. And you see my other hobbies? (TV showing her image with her two grandchildren)

Niall Paterson- Sky Correspondent: Indeed, the wee ones how beautiful they are too! Ricci, look, a question to you that I’ve lost count of the number of people working across the health service that we’ve spoken to obviously, not just people like yourselves are on the front line of health care, but those working in clerical, those portering people around the hospitals, everyone has had a very stressful time that are working in the health service. I suppose the question is this. Is it the case that actually, you know, the only people who can really understand what you’re going through at the moment, Ricci,are the people that are going through it at the same time themselves?

Ricci Plastow: Yeah, no, I think it’s always been the way with NHS workers you almost feel like you have to bottle it up and not take the work home with you and talk to loved ones and friends and family because you don’t want to put that on them. So to have people in a similar situation that you know have been going through that, it just allows you to open up a lot more and so that social connection is a great idea.

Niall Paterson- Sky Correspondent: And Aggie to you, obviously, we’ve seen the picture of you with the family, and I suspect you’re taking quite a lot of comfort and support and solace from them, but just give us an idea. Again, we’ve asked people on this program since the start of the pandemic to share their experiences, but just give us an idea of how stressful it can be working, you’re on the frontline of our health care system.

Aggie Fathieh:  Well, it has been very stressful, because normally, your work and me working with high-risk people, my whole work is based on preventing people becoming hospitalized, coming to the hospital. But during the COVID, it was even harder, because if they didn’t come to you, if they didn’t come to your appointments, they would become hospitalized. So you had to work much harder. Decision-making is much harder, when you are working there it’s quite difficult. And you as a health professional, you want to touch people, you want to help them, you want to help them if they want to get up, if you want to comfort them, but you have to watch all that with every step. You have to think, is she going to be worried if I touch her? Am I allowed to help her now or not? So, it’s really difficult. And also people that you see week in and week out, become like a member of your family and it’s so hard to hear that they’re not well. And also your colleagues, your colleagues are working in frontline and you hear that they have become hospitalized. It’s been really hard, really difficult. And if you have to shield yourself and be out again, you have to control everything from outside and you lose your control and it’s much harder. So you lose your social interaction. It hasn’t been a very easy time.

Niall Paterson- Sky Correspondent: While I’m not surprised, but I am sad to hear that. But honestly, I’m sure plenty of people say to you on a daily basis, Aggie, Ricci, thanks for all that you’re doing in the health service under these circumstances at the moment and thanks for sharing your story and hopefully at some point Ricci, we’ll find out how good you are at Persian cooking. We’ll get you back on the show soon. Guys, thanks very much for joining us this one. Appreciate it.

Aggie Fathieh: Thank you very much.

Message from eSwapp: If you work for NHS or know someone working for NHS who can benefit from this, please check out https://www.eswapp.com/nhs/ 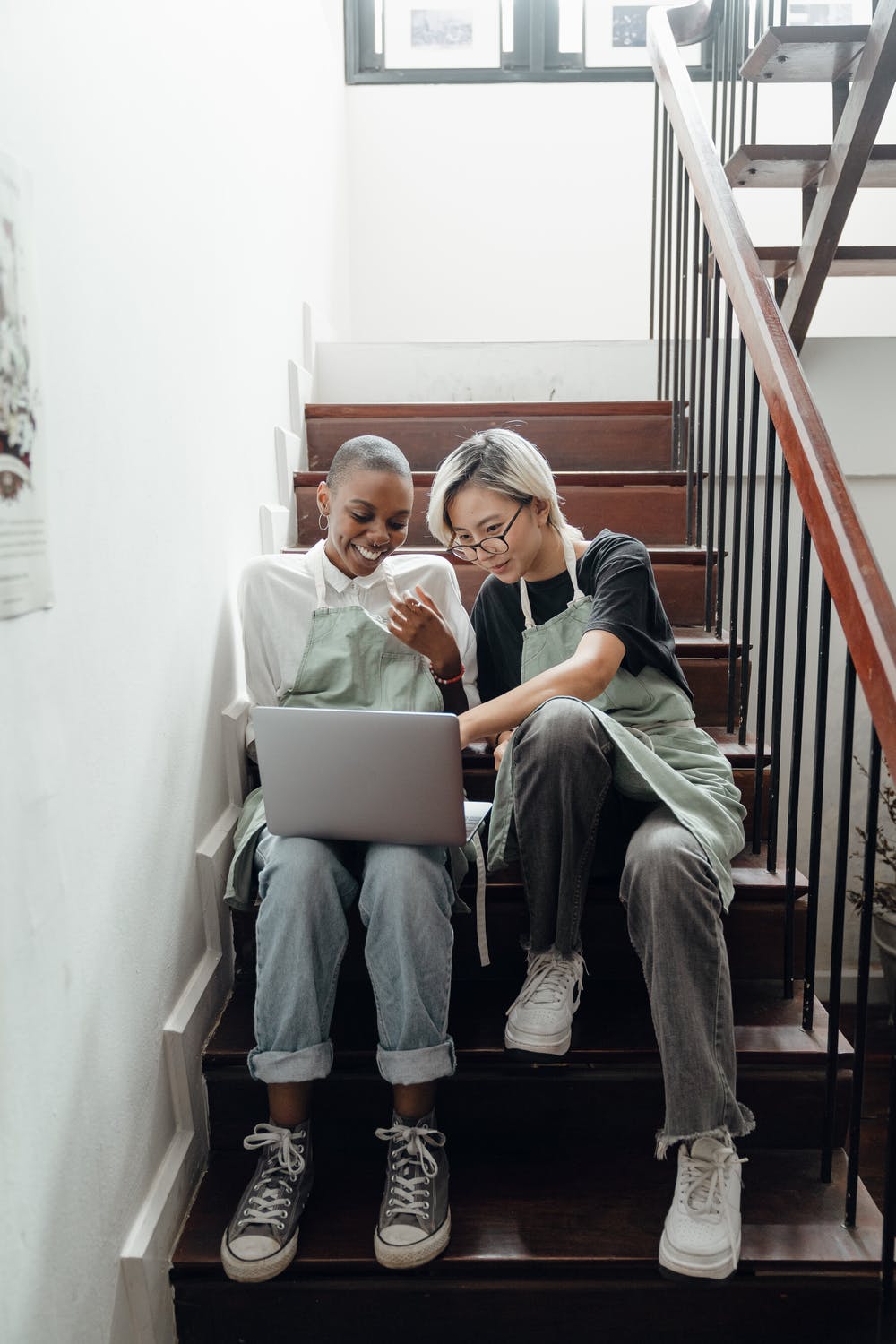 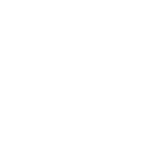